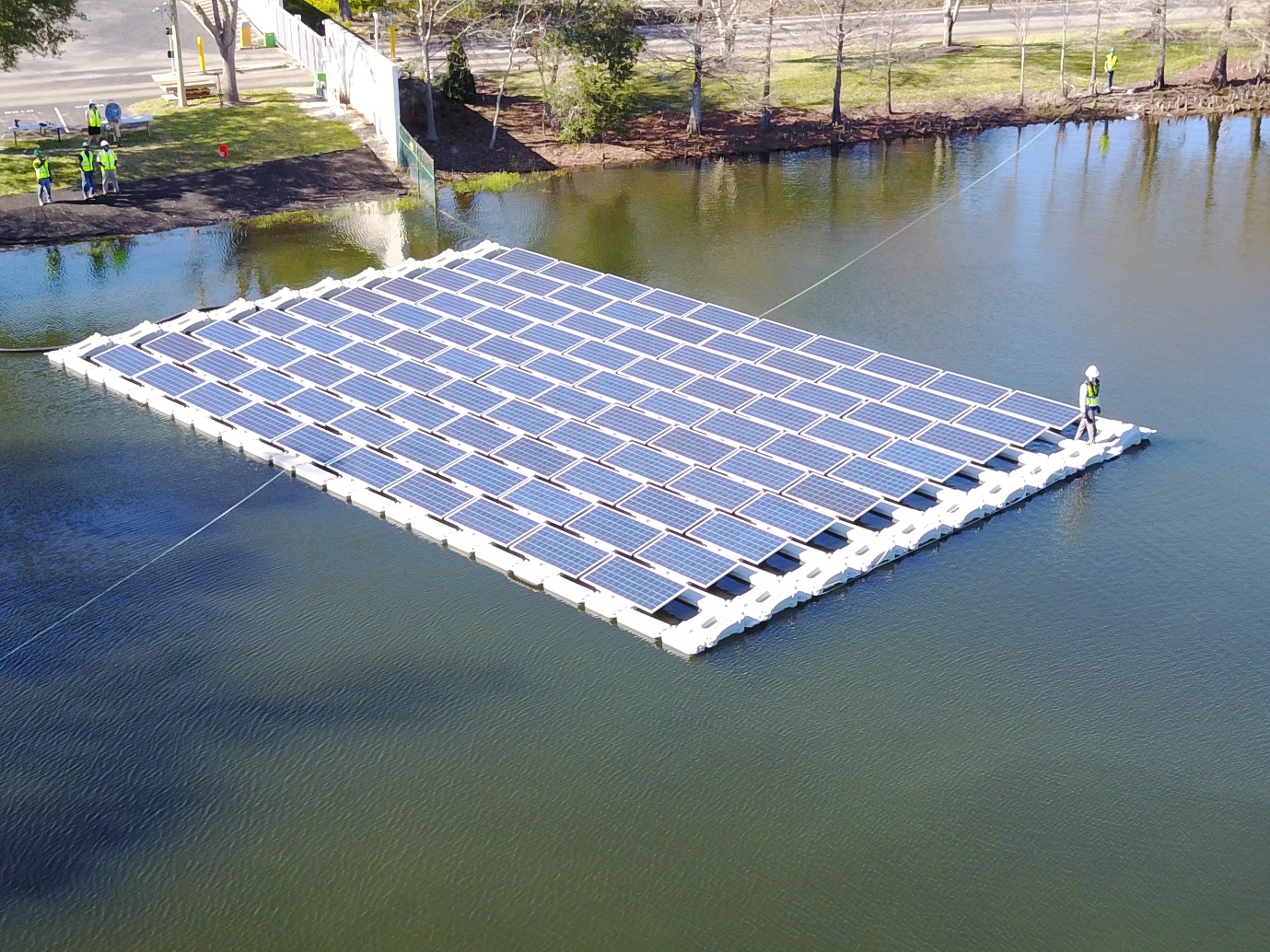 You certainly have seen ground mounted solar PV or rooftops with solar panels. Now, imagine solar panels floating on water instead of being on the ground. Amazing, isn’t it? Well, floating solar (or floating photovoltaic, FPV) is an emerging trend and makes the promise of being an essential part of the toolbox for addressing climate change. According to the International Finance Corporation (IFC), more than 300 floating solar parks were installed worldwide in 2020. The total installed capacity was estimated at 1.5GW at the end of 2019 and is predicted to reach 4.6GW by 2022.

How does it work?

The electrical configuration of a floating PV system is similar to the land-based PV system. The concept required attention to many elements, as it involves electricity and water. The solar panels are attached to a series of interconnected plastic rafts to keep them from drowning. The whole system is securely anchored to the bottom of the water body. For this matter, they are usually located in calm waters such as ponds, lakes or man-made reservoirs. Floating walkways are provided to enable access for any maintenance or servicing work. The solar electricity generated is transferred to a central inverter before reaching electrical equipment onshore via underwater cables. The inverter is used to convert direct current (DC) produced by the solar panels into alternating current (AC) to power electric devices through the power grid.

Floating solar can also be installed on the reservoir of dams. Transmissions systems already available in hydropower facilities can be used to store and distribute the electricity produced by the floating PV. The latter is floating next to the dam and complement the hydropower plant since solar power has the most potential during dry seasons while rainy seasons are more suitable for hydropower. Floating solar could significantly increase the capacity of large hydropower plants while covering only 3 to 4% of the reservoir. Hydroplants reservoirs cover more than 250 thousand square kilometres worldwide. The area would be enough to host floating solar capacity to generate 2.5 times the electricity produced by all the underlying hydropower.

A market in the making

Solar energy in general is a booming market. Generating electricity from the sun is cheaper today than a few years back and is an effective way to produce power without burning fossil resources. More and more innovations are popping out in the market and challenging previously introduced technologies. Bifacial solar panels are one among other examples that are becoming increasingly popular due to their extra benefits.

Bifacial solar panels are similar to traditional solar panels except they have their backsides covered with either transparent sheet or a double glass panel. The structural difference makes them unique as they can produce energy from both sides, increasing the total electricity output. These bifacial solar PVs are now tested on water too. Bifacial modules in floating PV applications have been modelled by scientists led by the University of Ontario. Their findings suggest that the module could receive 55% more sunlight than a monofacial floating module. Many factors need to be taken into consideration, such as wind, but the potential advantages of the simulation are promising.

The Asian-Pacific region accounts for 87% of the global floating solar capacity. The rest of the world accounts for an estimated 350 operational floating PV systems, spread across more than 35 countries. The first installations were introduced in Japan in 2017. Since then, the country has commissioned some 180 MW of floating solar projects. Korea, the United Kingdom and China – which has the largest number of plants installed – have been closely following the footsteps of Japan. Other Asian countries such as Bangladesh, Laos and Indonesia have also announced larger floating solar projects.

India is targeting beginning of operation of the world’s largest floating solar project for 2022-23, which is expected to overtake China. The floating panels will cover approximately 2,000ha of water with a capacity of 600 MW. In Europe, the largest floating solar array is located in France. Installed in a lake in 2019, it produces enough power to meet the demand of 4,733 homes while offsetting 1,093 tonnes of carbon dioxide per year.

Companies like Equinor – an oil and gas giant – are focusing R&D capital towards further innovations. Alongside the technology company Moss Maritime, Equinor announced a new research project: the first floating solar pilot plant in rough water. The project construction is planned to start in late summer 2021 in Western Norway. The company is also currently testing other floating solar projects in Sri Lanka and the Netherlands to address, respectively, how to increase energy productivity and test the resilience of production under harsher conditions.

Beyond producing energy from the sun, it has been found that floating arrays could be used to convert the CO2 trapped in seawater into methanol. Methanol is a chemical used as a fuel in aeroplanes. According to a study published in the Proceedings of the National Academy of Sciences journal (PNAS) in 2019, large-scale floating islands could power hydrogen production and CO2 extraction from seawater. The gasses produced would then be reacted to form methanol that can be reused as a fuel. The study suggests that this innovation could reduce Greenhouse Gas Emissions (GHG) emissions and dependence on fossil fuels. A single floating solar power plant could apparently produce more than 15,000 tons of methanol a year. This fuel could power more than 300 return-trip flights between New York City and Phoenix.

This innovation is starting to attract global attention, because it has several advantages that could compete with its ground-based sibling. First, they can contribute to a healthier environment as there is no loss of valuable land space. Floating solar installations don’t occupy space that could potentially be used for other purposes such as agriculture. It also avoids vegetation and tree clearing which is sometimes required for larger installations. This is the reason why floating panels have been tested in countries currently coping with a lack of available arable land like China or Japan. Second, its performance is 5 to 10% higher than ground solar arrays. Water and wind can help to cool the solar cells, improving their efficiency and productivity. The panels can also diminish water evaporation during periods of drought and hinders the production of algae which threatens the quality of the water, especially in freshwater basins. Finally, the most obvious but still consequent asset, this technology is a source of clean, renewable electricity that will help reduce GHG emissions.

However, these installations can come with disadvantages too. Engineering and construction costs are higher than land-based solutions due to specialised equipment needed, although the cost is expected to lower with further developments and technologies. The majority of floating solar arrays are also bigger in scale, making them appropriate for municipalities, communities and companies but not suitable for individual households.

Today, despite its challenges, floating solar shows promising growth trends around the world. Operational capacity was only 10 MW in 2014 but it reached 1,100 MW in 2018. A number of companies are pushing the boundaries of floating solar further to make them more productive and reliable, as the previously mentioned effort by Equinor. The system marks a milestone in the development of solar energy and is definitely an exciting new prospect that expand the possibilities for solar renewable energy.