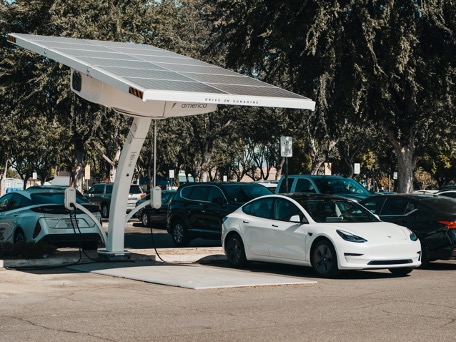 For most individuals or families, the largest purchase they will ever make is a house, followed by a car. Nonetheless, this expensive item of transportation remains unused for most of its useful life. Even commuters who drive an hour a day to and from work leave their car parked and idle for more than 90% of the time. We are producing huge volumes of resource-intensive assets which simply take up urban space. Add to this the emissions of internal combustion engine vehicles and our reliance on cars looks increasingly unsustainable.

Electric Vehicles (EV) are a solution to our pressing need to decarbonize transportation, but this new solution can enable much more than simply providing a cleaner alternative to internal combustion engines, ranging from further advancing sustainable transportation, prompting the creation of cars-as-a-service, and supporting a greener grid. The acceleration of adoption of EVs is the first ingredient in this transformation mix.

In 2021, global sales of EVs more than doubled. According to the EV Volumes Database, global sales of Battery Electric Vehicles (BEV) and Plug-in Hybrid Electric Vehicles (PHEVs) in the global light vehicles market (passenger cars and light commercial vehicles) passed 6.7 million units in 2021, representing 8.3% of all sales in this segment. This volume translates to 108% growth over 2020. China dominated sales with almost 3.4 million BEVs and PHEVs sold, more than 50% of the total, followed by Europe with over 2.3 million units and North America with 0.73 million units.

Empirical evidence gathered since the 1970s shows historical decreases in the cost of lithium-ion batteries, currently the key chemistry in both stationary and mobile batteries. With long-term deflationary trends bringing the cost of BEVs down (short term supply chain and commodity price spikes notwithstanding), much lower maintenance needs, and the increasing price of gasoline at the pump, BEVs are set to increase market share due to price competitiveness.

The user experience of BEVs is potentially the most exciting reason stimulating adoption. Creative solutions developed by disruptive new players in the space (like Tesla, Nio, BYD, Lucid Air) brings the potential for a much more personal and unique experience. These BEVs are already connected to databases powered by 5G and are effectively computers on wheels. Two key ongoing developments will bring the car of the future to another level: autonomous driving and bi-directional batteries enabling the development of vehicle to grid (‘V2G’) technology. The car of the future will be nothing like we know now and other new players in the space are further enhancing the sustainability of vehicles.

New concepts emerge: Powered directly from the sun and designed to be shared

Solar vehicles are powered by energy from the sun. They are equipped with photovoltaic cells that convert solar energy and then store it in the car’s battery. Solar cars benefit from range extension versus standard EVs, which helps overcome the issue of rapid discharging when on the road, thus minimizing range anxiety.

German-based Sono Motors, founded in 2016, has developed a new concept for this solar car, named the "Sion." It was launched at the 2021 Consumer Electronics Show, a big tech event for global innovators. Beyond the 255km battery enabled range, the Sion benefits from an additional 34 km range on a sunny day, which is more than the daily distance driven by the average European driver. The Sion has a maximum speed of 140km/h and is designed with 248 solar cells integrated into its body, and has a target retail price of below €30,000.

However, it has two further features that make the Sion so unique. Firstly, it has bi-directional capability, making it V2G ready. The Sion will be able to use the car’s battery and push the energy stored there to power a house or the grid, or other devices and vehicles. During off-peak times it can charge itself, while during peak hours it will work as a temporary electricity reserve. Secondly, the Sion will come with an app for ride pooling and car-sharing; a built in, integrated car sharing functionality that enables multiple users to seamlessly share a Sion. The Sono app can be used to decide for how long and with whom you’d like to share the Sion. More usage, lower ownership cost and the monetization of the valuable grid-supporting battery means a much more sustainable product.

Optimizing the valuable asset inside BEVs: the emergence of V2G

The International Renewable Energy Agency, IRENA, makes projections for our global EV fleet. In their Global Renewables Outlook issued in 2020, they estimated that EVs could reach 379 million units by 2030, and potentially 1.1 billion by 2050. IRENA’s numbers are in line with other forecasts. For example, the pure V2G player Nuvve, a 10-year-old company based in California, estimates that by 2040 around 560 million EVs will be on the road globally. It is only when the idea of convergence of transportation and energy is quantified that we see a powerful transformation ahead: Nuvve points out that the batteries inside these BEVs could provide enough energy to power all homes in the U.S. for 1.2 years.

Households are starting to invest into solar rooftops, stationary batteries and BEVs. As we decarbonize transportation and heat, the solutions will converge more and more. The new BEVs will represent more demand for electricity, but they are themselves part of the solution. Optimizing and monetizing local solar and batteries is not a concept, it is a solution already in place. Just like Uber and AirBnB allowed car and homeowners to generate cash flow out of those assets, V2G aggregators like Nuvve and distributed generation names like Sunrun are doing the same for solar rooftops, stationary batteries and batteries inside EVs. The car of the future will be autonomous, V2G enabled, solar enhanced and designed for maximum sustainability. The elements are all here and this new car will be driving past you within the next five years.